“What’s the difference between Southern food and soul food?” is perhaps the number one question we African American food writers get from the media. 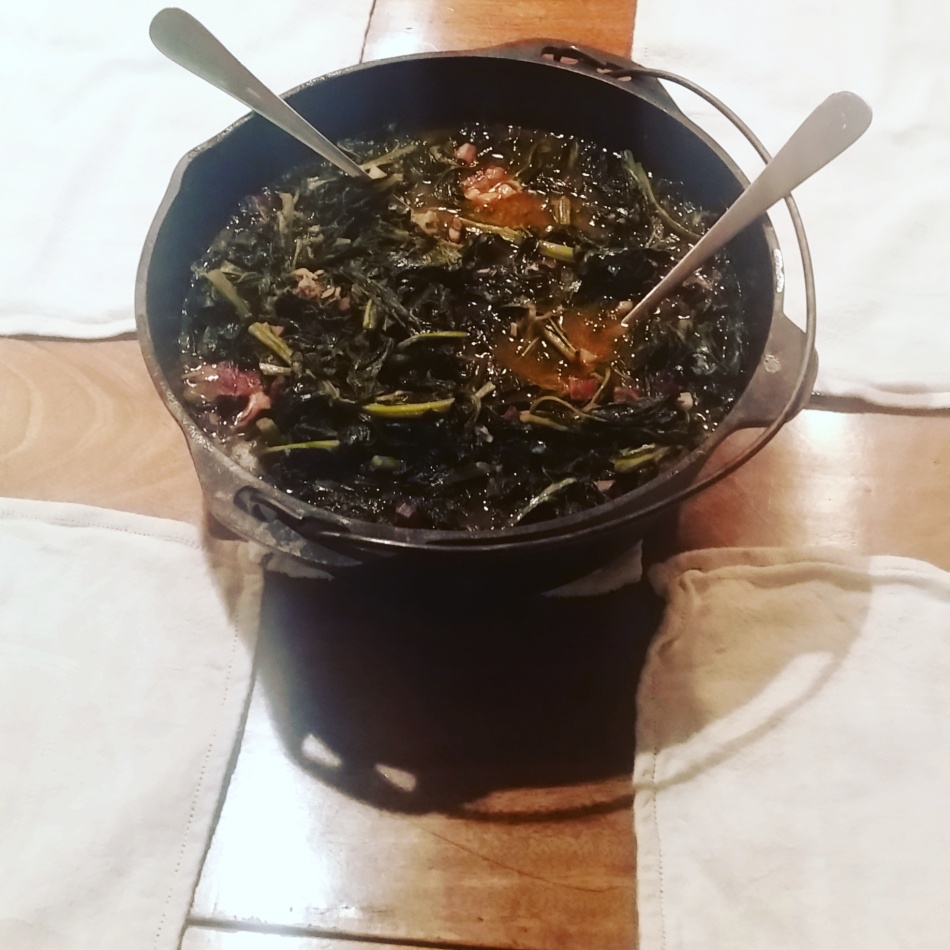 “Ours just tastes better,” jokes Toni-Tipton Martin, author of award-winning The Jemima Code.  Adrian Miller,author of the also award-winning Soul Food, chalks it up to spicier, saltier, fattier, more sugary extremes in terms of palate.  I have been known to hit an audience with “one is flavored with oppression, the other with liberation–you decide which one.” All facts, figures and quips aside, we are no closer to the answer.  It would perhaps behoove us to ask a better question.  Why do we care?  Why even acknowledge a distinction between “Southern,” and “Soul,” at all?  What will it tell us about ourselves—the question tells us more about who we are than does the answer.

I have consistently said that soul food is the memory cuisine of the great and great-great-grandchildren of enslaved people.  Soul is the descendant looking back on an edible text that supposedly defines his shell and accounts for her essence.  It is the vernacular meal, the country bits, the funkiness of Blackness, the gastronomic equivalent to the visual, aural and oral elements of being colored in America.  Soul is not a reaction to the world from without, rather it is a consolidation of the narrative from within African American civilization, a necessary and expedient reduction of the complexity of our story into a repeatable, reliable, sustainable menu that dances between the Big House and the quarters, weekday miseries and holiday treasures.  Soul food is a condensed version–1619-to maybe 1960–a survey of everything that came before the moment we could wait no longer to be—American.

Southern is often code or short hand for white folks, or less often said but equally true, the rest of the South’s understanding of food with a flexible “door,” by which we enter and exit.  I have often found problematic that Southern-not only in the white mind but the black mind–which is to say just more plainly–human minds with different facades–perceive Southernness as something that can be compartmentalized.  Don’t get me wrong–our experience of the Southern narrative has never been completely the same and it was never intended to be.  When white people say “Southern,” it seems to be a fixed geography, a stance, a box, an otherness and perhaps a different species of nationlism.  When black people say Southern it seems to be a calling card, a reference to our “Old Country,” a nod to tradition.

But Southern and Soul are not cultural antipodes.  They are reference points in the cloud of memory.  The Southern soul was shaped by the African presence and following it, the Afri-Creole world and its colored, Negro, Black and African American  descendant selves.  Racial caste, a non-delight imposed on us rather than self-engendered made assumptions about the inherent difference of these close cousins–we were and are blood relatives–and always will be.  This perhaps renders the distinction moot–but we haven’t really understood this until now, that the white Southerner was a creation not just of the melding and meddling that happened long before he or she was a thought; but merely a product of the oppositional stance history granted said person.  As long as the white Southerner was the opposite of all that was not white, the white Southerner’s sense of “Southern” would be trapped in the amber of false power, a sense that he was Adam and she was Eve and the naming of creation belonged to them.

Meanwhile black Southerners were not only above in numbers and beyond in reach  in relation to Anglo America, they were products of an Atlantic World that essentially represented their expansion into the Western hemisphere long before the Americas were conceived as a “New Europe.”  In our blood remain the codes for the building blocks of Las Americas.  The Caribbean, Brazil, South and Central America, Mexico—all of it kissed with the touch or unending embrace of West, Central and Southeastern Africa.  Because of this, the supposed dichotomy of Southern vs. Soul cannot be read as a stand alone debate.  After all, could not the same be said about Cuba or Brazil or other places where the integration of Africa into the national mind is non-negotiable even if race, class and power are ever-shifting and frustratingly  murky.  As old an varnished as the term may be, the United States’ claim to Melting Pots and Salad Bowls has failed its place among the “Mulatto States of the Americas,” where it is clear something happened here that was not the replication of Western Europe or the British Isles, and even the navigation of native/indigenous selves was sausaged into the castings of salt vs. pepper, or in our case, Southern vs. Soul.

We are powerfully divided by concepts even though we are together in many ways, namely in spirit.  It is ironic that the burden of claiming and associating with unity has been consistently yoked to the Black man and woman rather than those whose sense of whiteness and the poisonous notion of “race,” can be traced back to the unholy marriage of chattel slavery and mercantilism and empire of the 17th century.  Black people are left with the job of dismantling prescriptions we had no hand in creating to assuage the just returns of those prescriptions–emotional and cultural dregs of anger, resentment, retarded growth an arrested or limited power that stain and imbue our lens, leaving us wrestling Dixie. 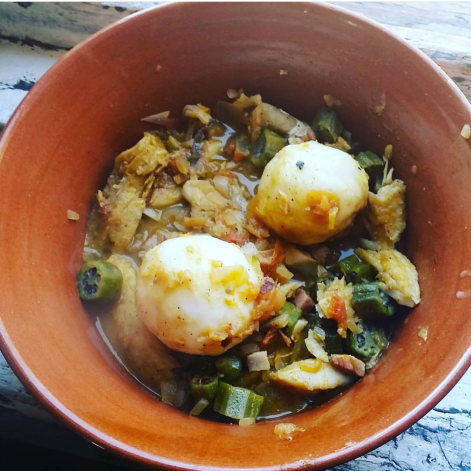 I suggest that we abandon the need to bring peace through ambiguity.  We want lines to melt and meld and its  not “all the same food,” food is not divisible by open claims of ownership but rather by necessary texts of meaning. Soul is the dialogue between past and present in search of a sustaining culinary narrative, Southern is an exercise in quasi-national cultural identity built on distinctions and oppositional character–these notions don’t emerge from the same place nor do they sound the same tone.  The conversation in which they are often both rather carelessly bandied about has the same end–to discern place, to account for the “location” of cook and eater, and to organize communities of eaters into manageable boxes.

These boxes–are the problem.  Look, kalach and paska is braided eggy Easter and holiday bread, it is not challah–which is also eggy braided bread.  They are cousins but they are not the same even if they have similar cultural functions and have a similar taste.  The relationship between Eastern Europe and its Ashkenazi Jewish minority is a tortuous journey, but the language, food, music, aesthetics and genes of Ashkenazi Jews are full of reminders that the Slavs among whom they found one thousand years of sojourn did not remain aloof.  The Shoah erased the unutterable truth that separations imposed by centuries of West meets East anti-Semitism could not halt the interpenetration of civilizations.  Despite all of this we remain addicted to the boxes that say there was once a true “us,” and a true “them.”

Come back to the South.  We know it was a confluence of cultures and people meeting and mixing up and down the ladders of caste, racial power, social capital and cultural bleeding. Is there room outside of our boxes that will allow us to re-imagine Southern and Soul as ideas that are less cognate than they are complimentary?  We can acknowledge a common family tree,  give nod to “the world they made together,” to similarity of contexts and even of forms, but to suggest a notion of Southern vs. Soul or Southern or Soul is missing the point.  This is a dialogue and dialectic of Southern and Soul.  Southern is soul and soul even outside of the South is Southern.  White folks who testify to love of okra do not nullify the original transactions that led to the Africanization of European Americans beneath the Mason-Dixon as the adoption of breads and macaroni and cheese and many other foods do not negate the power dynamic occupied by white culture on the American plantation.

Okra and Macaroni and Cheese–without a great dissertation, are good examples.  Okra is something northwest Europeans found on the way to being American.  It is something that tells me that I am not just American, but I have a story before America.  Macaroni and cheese (aka macaroni pie) tells me that I am incomplete without my American and before that continental European story even while I am the latest chapter of Africa’s move across the globe and into time and across boxes.  That my white Southern cousins can choose or deny our desire to serve these foods at the same restaurant or occasion is a matter of preference, but when they sit side by side on their plates or mine, they tell different stories about our journeys to the plate. These journeys are Southern and Soul and beyond–they are Western and African Diaspora, they are Atlantic World and Las Americas, they are Afro-Atlantic and Anglo-American.  It is our ability to perceive and appreciate the layers of history and self that spice our food that makes it so, not whether or not it can be neatly boxed and labeled as Southern or Soul.

11 comments on “Southern or Soul?”