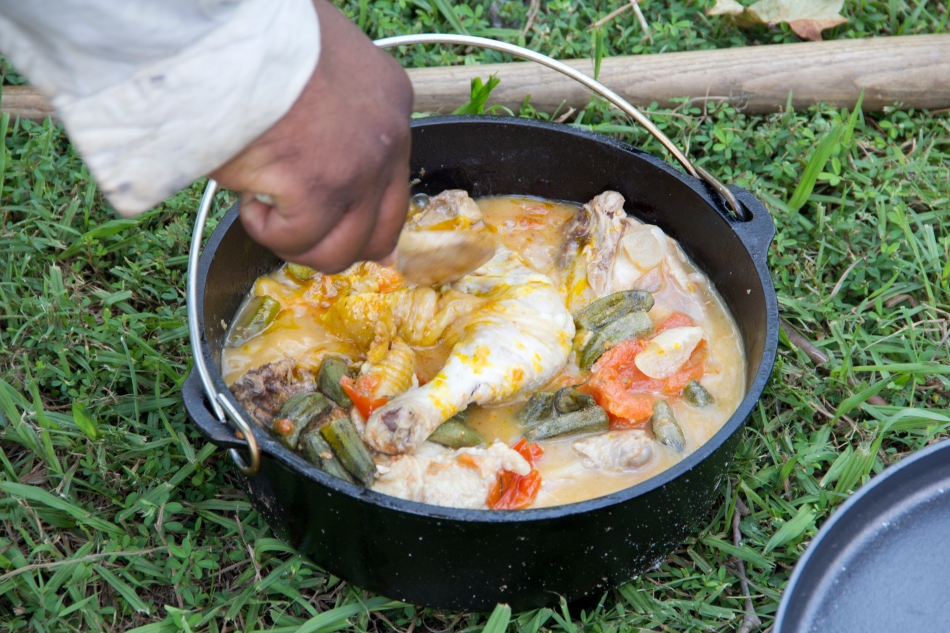 So if you were watching Anthony Bourdain’s acclaimed CNN program Parts Unknown on Sunday, May 18th, you caught this exchange between Bourdain and the head of the Southern Foodways Alliance, John T. Edge.  The dialogue between them was so revolutionary that it made Eater’s one-liner “Quotable Bourdain” summation.  And thanks to the miracle of transcripts, here’s that dialogue from the seats of Chef Gino Lee’s Big Apple Inn in Jackson, Mississippi: (I have made some corrections on the uncorrected transcript from CNN’s website.)

BOURDAIN: Back when things were hopping, Gino Lee’s (ph) great grandfather, Juan Big John Mora (ph) moved to Mississippi from Mexico City, started a family with an African-American woman in Jackson. He sold hot tamales out of a steel drum on the corner.In 1939, he moved the operation inside, right here, now, the last restaurant on the street. Lurking inside, waiting for us is John T. Edge, who leads the Southern Food Ways Alliance.Mr. Edge, how are you doing? He makes a point, a mission, out of knowing and teaching as much as he can about the real culinary traditions of the south, and doing what he can to keep them alive and unmolested. …..

And of course, some hot tamales, which at this point in history are about as Mississippi as they are Mexican. Like the blues, they came out of Mississippi in the early 20th century as Mexican migrant workers came in to replace African-Americans, who were headed to work in the great factories and stockyards of Chicago and Detroit.

EDGE: Yes, sitting down here, eating tamales, we can sketch a history of Mississippi. And that’s kind of what I’m most interested in doing, helping southerners understand that their foods are as African as they are Western European.

EDGE: And hopefully, by way — if not largely, you know, music and, you know, if all the other cultural expressions of the south, I think food is a sneaky way of getting at some of the serious stuff we’ve been talking about.

LEE: As I told you before, I didn’t know what a cool job or what a cool restaurant I had until you showed it to me. I’m just making a living, you know, just like a lot of folks around Mississippi.

BOURDAIN: There is a — a discomfort level about exploring southern food ways or particularly Mississippi food ways.

BOURDAIN: When you’re talking about high-end traditional southern cooking, you’re talking plantation slavery cooking because that’s where these recipes came from. So to revel in that, you don’t want to tumble into nostalgia.

The potential for awkwardness…

BOURDAIN: …and offense is enormous.

EDGE: They come to the south looking for the past preserved in (ph) an (ph) ember (ph), but the reality is something different. And I want to fix it. I want to fix it. 1865 and 1965, I want it to progress and change.

I want to document the change along the way and celebrate the (ph) changes (ph). The burden of race is upon us and we must (ph) shake it. And that can make us better.

This is good stuff. Groundbreaking stuff.  It’s the cutting edge of what needs to be done in Southern foodways, no puns intended.  The mandate is here: to explore Southern food’s untapped narrative of roots in (West, Central and Southeastern) Africa, to know and teach about the South’s historic and enduring food traditions; to use food as a lens to explore and delve into serious issues of race, class, health, history and future; to acknowledge and understand the plantation cuisine prepared by the enslaved, that birthed contemporary Southern cuisine; and  last but not least—to move from roots to wings—to see  and honor positive evolution, change, progress, innovation, and renaissance.  Throw in the lead narrative from Gino Lee–of family and family trees, recipes passed down from generation to generation, mixed bloodlines and complex identities; and African American chefs and foodies in the South drawing upon ancestral wisdom to bring new forms of prosperity and community using food–and we’re about to burst.  Migrations and place and memory, oh my!

If only there was a book that talked about all of this.  What if we had one person, a descendant of enslaved Americans, (as well as their slaveholders and Native Americans,) writing that book.  What if that book traced recipes and individual narratives in the author’s bloodline to show how Southern food developed and how far we’ve come and how far we’ve got to go?

What if that book not only talked about that side of history, but the incoming role of new Southerners from southeast Asia and Latin America, about how the people from far and wide fit into an ever-growing, ever more complex Southern family?  This book would talk about how people shaped the crops and the crops shaped the people.  This book would address how farming, hunting, fishing, gathering were tied to ancient cosmologies that crossed the Atlantic in the minds of my ancestors, those lonely African exiles.

I am delighted to tell you such a book is on the way.  It’s my book.  The Cooking Gene. Thanks to Eater you can read about it: here.  My fearless agent, Jason Yarn worked tirelessly for the past 9 months to help me finish my proposal and then market it.  It will be published by an imprint of HarperCollins, likely sometime in early 2016.

Begun two years ago as a formal project, and probably in gestation since my fourth grade teacher told us to go home and find our roots; The Cooking Gene is a woven narrative that began with The Southern Discomfort Tour in 2012, and continued into 2013 as I made more rounds around the South.  The more I traveled and researched the more I discovered that we Americans and we, the Southern people were intimately connected by culture, food and kinship–both real and fictive.  The chances that the white, black and brown people I encountered were relatives kept increasing. My notion of family–genealogists, living history interpreters, descendants of the same plantations, descendants of major slaveholders, fellow Jews, newly arrived immigrants from Mexico and Vietnamese market growers in New Orleans–expanded until my arms could not hold all of the humanity I was embracing.  My DNA results, which keep coming in–also show links to Africa and Europe and communities around the world where those cousins went not so very long ago.  And all the while, food remains the glue.

My culinary homeland is clearly the South..but food isn’t all there is to the story.  For African Americans every aspect of life was impacted by the diet forged with their neighbors, relatives, persecutors and friends.

When I decided to retrace my family’s journey from Africa to America, from slavery to freedom, I chose food as the medium to tell that story. And I discovered that the way Americans view the cuisine and culture of the South is part and parcel with how we currently view race in America.  For Southerners I found the ties that bind were centered around the culture of food and memories of self-sufficiency and community.  I made bonds for a lifetime as I worked the fields and cooked the food, hewing as close as possible to the way my ancestors who were enslaved did.

In the so-called post-racial era, Southern food is celebrated and marketed throughout the land, but almost always decoupled from its origins. Where other cuisines are defined by their history – Italian, Chinese, French – no one is talking about how there is a direct line from the cornbread and barbeque on your table to a man in chains. Culinary justice does not exist for the descendants of enslaved people whose contributions are, at best, forgotten, and so they enjoy little of the fruits of their heritage in the face of poverty, food deserts, chronic disease and enduring racial tensions.

My narrative in The Cooking Gene is keyed into the major places and foods of the South, but it is not a book that just shows the history of rice, okra, black eyed peas and watermelon and moves on. I want you to see my development as a historic chef and culinary justice activist, after a long season in my childhood where I hated soul food.  Come with me to visit the graves of both my white and black ancestor’s on the grounds of their former plantations to see the history of the cuisine this country now enjoys without thought. I am poking at a comfortable blindness, not to accuse and shame, but to energize the conversation on how food is failing the people whose ancestor’s created the hottest cuisine of today. 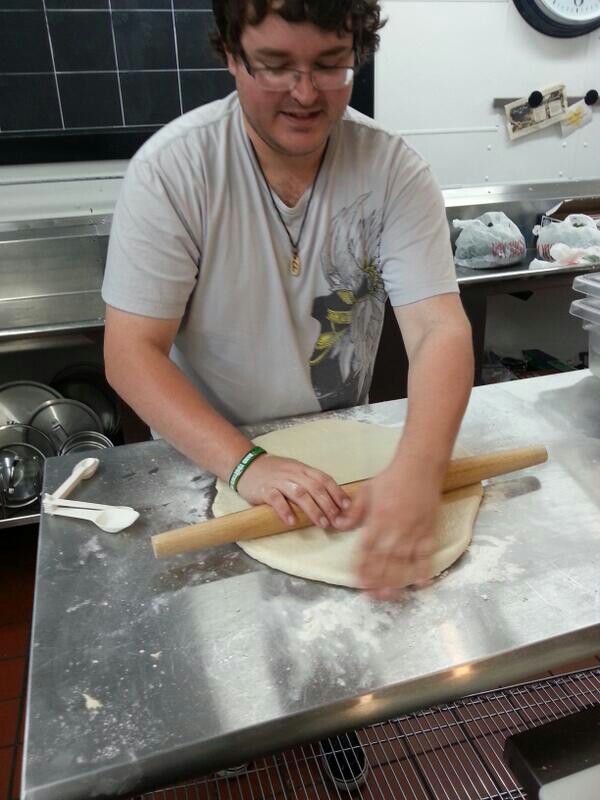 Teaching my friend how to make antebellum dinner rolls in Chattanooga, Tennessee at DishT’Pass.

From dinners with Confederate re-enactors on historic battlefields in Virginia to community based farmer’s markets in Atlanta’s inner city to kosher soul food cooking classes at a synagogue in Birmingham, I want to engage Southerners and all Americans in a dialogue about how food and family stories shape the regional self.  I look at every angle, mixing it up with scholars and chefs who have helped me in this culinary-genealogical detective story to uncover a fresh and unfiltered part of the American table in all of its glorious complexity.

And after all this, I cross the ocean to West Africa and Northern Europe to bring things full circle.

And roughly 150 years after the Civil War/War Between The States, this is my gift to my country, and my culinary homeland(s).

There is no greater agony than bearing an untold story inside you.—Dr. Maya Angelou

More on the way! Michael 🙂

9 comments on “From Parts Unknown to The Cooking Gene: An Engraved Annoucement”