“I chose Charleston because it is most historic city in my state, and at one time had the highest ratio of blacks to Whites in the country,” he wrote. “We have no skinheads, no real KKK, no one doing anything but talking on the internet. Well someone has to have the bravery to take it to the real world, and I guess that has to be me.”
–Dylan Roof, may his name be erased.

Hanna Raskin of the Post and Courier interviewed me after a spate of tweets about the season finale of Anthony Bourdain’s show on CNN, Parts Unknown.

Parts Unknown is one of several shows where Anthony Bourdain leads you on a culinary tour through food, careful to look at the culture of the locals, the political and cultural movements simmering around them, the culture and politics of the professional  kitchen, and perhaps most importantly the taste, the art and aesthetics of food as an expression of the values, intellect and beauty of people who cook it.

Anthony Bourdain is a hero to many, myself included. He is ever confessional, introspective, searching and beneath his scars a very compassionate man. I have praised him in the past because he has traveled to Sub-Saharan Africa (Ghana, Mozambique, Liberia, Namibia), Haiti, Salvador-Bahia, the Bronx and the Mississippi Delta. He has never shied away from the power of food to tell stories of people searching for dignity, equality, empowerment and fulfillment.
I have had moments where Chef Bourdain has made me weep. I have had moments where he made me question everything I thought I knew about food and the brotherhood and sisterhood of cooks. He has made me think about music and visual arts and the plate, of time honored craftsmanship in the service of the palate. I am still sure he will continue to give these lessons and more and invite us to be open to a world wider than ourselves.

The Charleston episode was disappointing and difficult. Nobody can deny the role Sean Brock and others like Mike Lata have played in putting Charleston on the map of culinary destinations. For this, they have added immensely to the local economy and reshaped the cultural scene in the Holy City.  Sean’s interests, like mine, span centuries and continents, we both value the stories that food tells and the power of the Southern table. In any other guise, we are kindred spirits, and in the deepest Southern sense, kin. The issues at hand are larger than the story of Sean’s career or the mystique built around his personal culinary journey.

Enter the debate on cultural appropriation and culinary justice. It’s not the import of the meaning of  white and black but rather power and opportunity that are at stake.  We are not here to assign guilt, lay blame or encourage shame. Simply put, it is not sustainable to pretend that the reality of food and illusion of race are not intertwined in American life.  Systemic racism is real as is inequality; and so is the pain of having a heritage that is so uncomfortable and discouraging that many have abandoned it in a cultural compost pile for others to turn into fertile ground. Our story has been used to raise the price point of many menus so much so that the descendants of the enslaved cannot afford to enjoy and appreciate the very edible heritage that was nourished by their Ancestors skills, knowledge and blood.

Charleston saw several flashpoints in the contemporary narrative of American racial angst via the murder of Walter Scott and the assassination of the Emanuel 9 as well as debates over flags, monuments, memory and commemoration.

This isn’t the Charleston Bourdain’s group filmed in…but it is the Charleston that has always had a particularly deep place in the history of race in America. Through this space many of my own Ancestors were brought during the transatlantic slave trade when 4 out of every 10 enslaved Africans brought to colonial North America arrived through this port after a journey through the belly of hell. This is where Africans were brought to make colonial slaveholders rich growing rice, indigo and long staple cotton. This is where many died before having children or creating American identities.

The swamps were malarial and filled with snakes and alligators, snapping turtles and burrowing insects and parasites. Our grandmothers were violated, children were separated from their parents. After violently coerced labor without compensation came the denial of education, opportunity, faith and family life. Abandon all hope ye who enter here.  It was here that the Stono Rebellion was launched that changed the laws of how enslaved people were managed. Long before the current uproar over Black lives matter, rules like this created a climate of pain and fear and resistance to freedom seeking as long as the freedom seeker was Black: 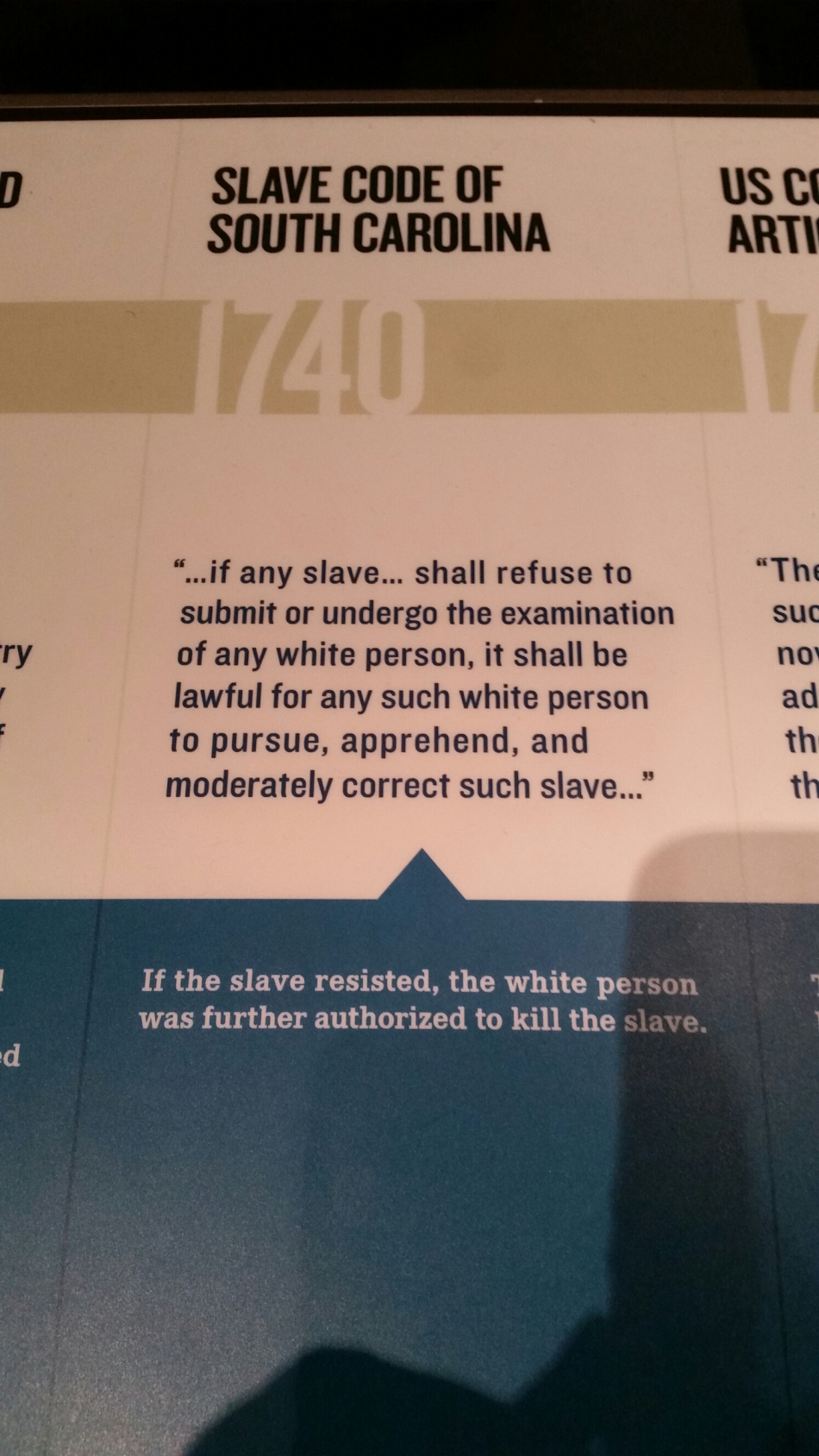 It was here that my sixth great grandmother arrived from the country of the Mende in eastern Sierra Leone. Rice based diets shifted the culinary culture. Dishes from what is now Senegal, Gambia, Sierra Leone, Liberia, Ghana, Benin, Nigeria, Cameroon, Congo, Angola and Mozambique mixed with indigenous people, British, French Hugenot, German, and Sephardic Jewish foodways with the new Afri-Creole culture as a base. Denmark Vesey rebelled against slavery and more laws were passed when  Charleston was one of the largest slave trading cities in the Antebellum era.

This is the backgound. Charleston is steeped in rice and race. Here like no place else, wealth, elegance and power were forged in the crucible of America’s original sin.

This isn’t the only Charleston they missed on this show.  The Charleston of fine dining is neighbor to food deserts and lack. It is a place where culture has always been the product land and water from the music of Gullah – Geechee to the sounds of the Shout. The land, which is quickly being lost to descendants, is sacred, our stories are sacred as well. It is an area for Black people that is still in need of opportunity and empowerment.

The Nat Fuller dinner, orchestrated by Dr. David Shields and prepared by chefs Kevin Mitchell and BJ Dennis with the assistance of Sean Brock was another Charleston that audiences didn’t get to see. There in the spirit of reconciliation and healing gathered Charlestonians and descendants thereof among with dozens of other enthusiasts and culinarians interested in honoring one of the great moments in American culinary history.

Nat Fuller, a formerly enslaved chef held a reconciliation and reunification dinner in 1865 after the Civil War. The commemorative dinner highlighted a 21st century Charleston and with it, the South, that is interested in embracing it’s past but moving forward in an informed and spiritually significant way.

We are not here for anger. We are not here for the immortality of furor or the encouragement of bad blood. The test for our future is whether we want to solve our issues or wallow in our mistakes. Charleston is where the reality of food and the illusion of race collide, this is where we have our teachable moment, and quite possibly a television moment.