“FRIED CHICKEN—Cut up two chickens. Put a quarter of a pound of butter, mixed with a spoonful of flour, into a saucepan with pepper, salt, little vinegar, parsley, green onions, carrots and turnips, into a saucepan and heat. Steep the chicken in this marinade three hours, having dried the pieces and floured them. Fry a good brown. Garnish with fried parsley.”

“SQUASH FLOWER OMELET—Put to soak in cold water. Then boil about fifteen minutes, strain in a colander and cut up, not too fine. Now a regular omelet is made but fried in a little bit of olive oil instead of butter, and just before it is turned over the flowers are spread on top. Brown quick and turn out on a hot platter.”

“HAM SAUCE—After a ham is nearly all used up pick the small quantity of meat still remaining, from the bone, scrape away the uneatable parts and trim off any rusty bits from the meat, chop the bone very small and beat the meat almost to a paste. Put the broken bones and meat together into a saucepan over a slow fire, pour over them one-quarter pint of broth, and stir about one-quarter of an hour, add to it a few sweet herbs, a seasoning of pepper and one-half pint of good beef stock. Cover the saucepan and stir very gently until well flavored with herbs, then strain it. A little of this added to any gravy is an improvement.”

Rufus Estes was a chef from Tennessee, born into slavery in 1857 in Murray County.  His cookbook, Good Things to Eat, as Suggested by Rufus: A Collection of Practical Recipes for Preparing Meats, Game, Fowl, Fish, Puddings, Pastries, Etc.  published in 1911, capitalized on a bit of plantation nostalgia left behind from the antebellum days.  African American cooks had become the symbol of Southern hospitality, skilled cookery, unsurpassed flavor and homegrown ingenuity.  The above recipes are really worth some commentary given how unique they are and how they speak to Chef Estes’ own wisdom in the kitchen.

The fried chicken is basically brined…If you want to adopt this recipe here’s my suggestion…Take a gallon of vegetable stock, a tablespoon or two each of green onions and fresh finely chopped parsley, add a 1/4 cup of kosher salt, a tablespoon of coarse black pepper or two, and maybe a tablespoon or two of white wine vinegar or apple cider vinegar.  I would omit the browned butter….but you can give it a try.

The squash blossom omelet shows that old Southern cooks truly did not neglect the edible flowers around them, especially the squash blossoms that would have been rampant in the truck patches of the summer and early fall.  Yellow summer crooknecks and straighnecks were probably the source of the flowers in this recipe.

Re: the ham sauce.   This is clearly a country cook at his best.  The plantation ham was cooked and eaten over several days.  It might last two to four days on a Big House table and probably longer on the table of someone who was impovrished.  It was one day’s dinner, another days’ breakfast, soup, hash, pottage, and finally you were left with the hambone, celebrated in Southern Black folk song.  It was a source of an incredible stock, and all of it–bone, marrow, sinew, remaining flesh was boiled to hell and enhanced with a bouquet garni, pepper, salt and beef stock.  Unlike Chef Estes’s we can enhance freeze our stock based sauces like this.  The flavor of country ham, herbs, rich beef stock and freshly ground pepper must have made everything from vegetable dishes to roast meats absolutely intoxicating. 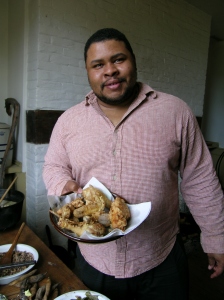