So there was this night where I had a guest over for a meal and they wanted tomatoes and chicken.  What to make?

The juice of 2 limes

2 cups of grape tomatoes, washed and sliced in half

1 cup or more of chicken broth

2 tbsp of margarine or butter

This is really not that hard…

Place the chicken in a bowl and rub with the salt and pepper, prick all over with a fork.  The rest of the ingredients from the red onions to the oil should be blended together until pureed.  Place over the chicken and marinate for 4-6 hours.

Begin the sauce by breaking down the tomatoes.  I usually place a tablespoon or two of olive oil in a pan and add a little garlic, (you can add the optional bell pepper here) and place the tomatoes in a pan over medium heat, stirring occasionally the tomatoes will start to breakdown in about 20 minutes.  Adjust the heat accordingly and watch them like a hawk.  Don’t let them burn but make sure you stir and squish them until they give up their liquid and soften significantly.  Remove the chicken from the marinade.  (Food safety alert) Cook a half cup of the marinade in with the tomatoes and add the chicken broth.  Let the sauce develop, bubble and cook without burning it!!!…Turn down to a low heat and stir occasionally.  Because you are using a marinade that raw chicken has been in, sustained heat is the only way to make sure you kill any germs.  The process should take around 20 minutes from boil to simmering over a low heat.

The chicken: If you have a  grill pan sear it for ten minutes each on both sides.  Place in a preheated 375 degree oven for about ten minutes loosely covered with foil.  (Start your spaghetti or linguine and cook according to recipe on box!) Chicken should not be overcooked.  Remove and allow to rest for five minutes and thinly slice.  Place the chicken in the sauce.  Add the margarine, butter or oil to the pasta and toss with the chicken and sauce.  Garnish each plate with parsley and scallion. 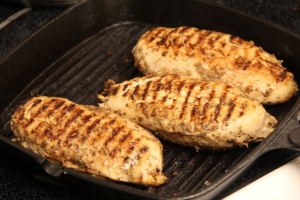 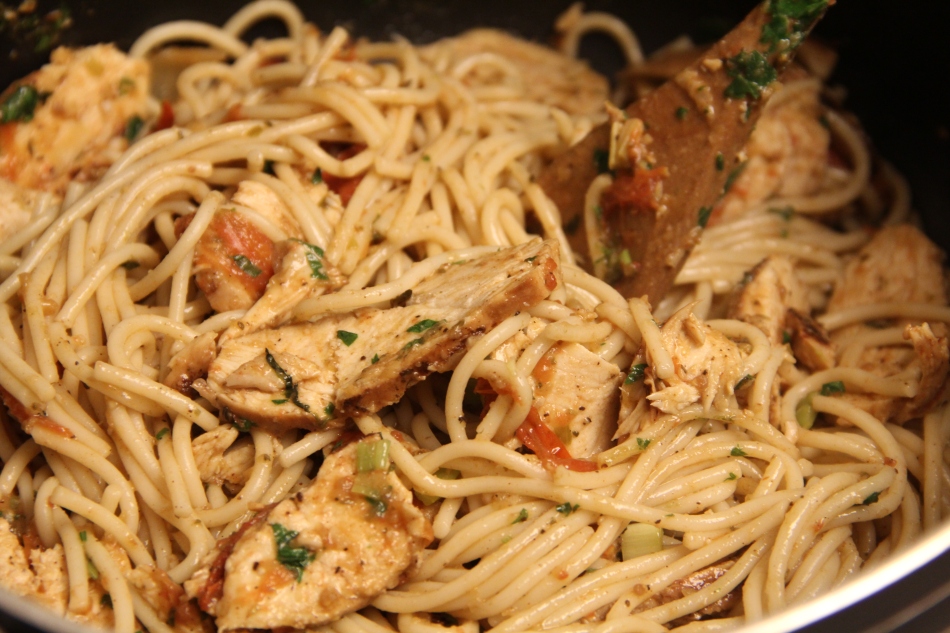