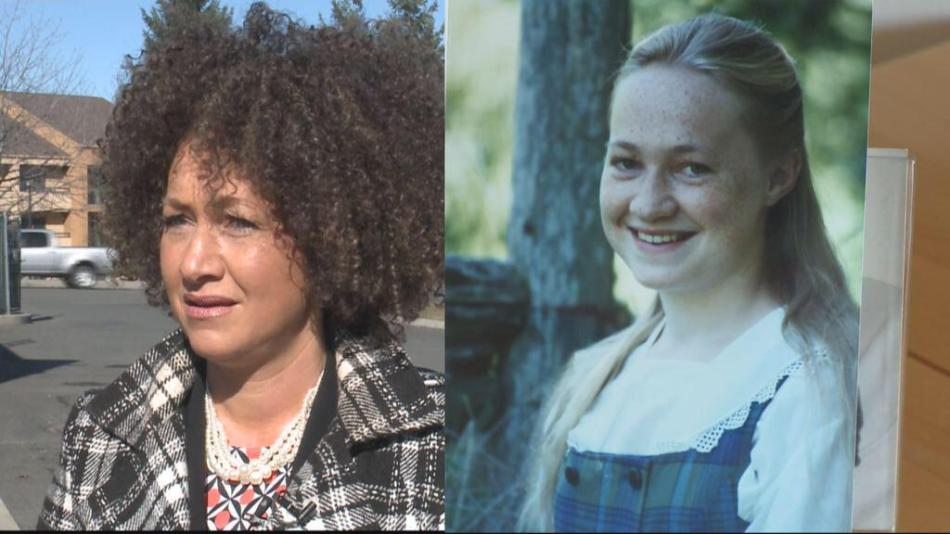 That’s Rachel Dolezal, NAACP activist, Africana studies professor, and according to her parents a white woman pretending to be a woman of color. Move over Iggy, all your problems just got solved, #fixitJesus Amen….

Now let’s be crystal clear. 1. RACE IS A COMPLETELY SOCIAL CONSTRUCT NOT A FIXED BIOLOGICAL REALITY, CULTURE AND ETHNICITY ARE FLUID BUT GENOTYPE IS NOT. 2. White people have been part of our blood and family life since we got here–and not just in the creepy rapey slave owner type way.  We have adopted white kids, we have had children with white people, we have even made some white cultural figures a part of our world.

When I was growing up I knew a short, red headed Irish American boy named Brian. Blue eyes, so help me. No surprise to me when we became Facebook friends as adults, that the love of his life is a Black woman. I never saw Brian as a “white kid trying to be Black.” Brian was Brian, and he’s still Brian. We never saw him as being ethnically or culturally separate from us African American kids. He was even MY rival for a spell in African American history class!

But truth…Brian has never claimed to be phenotypically “Black.” He’s never tried to pose as anyone else for his benefit or so he could more easily navigate his complicated identity. You’re a white person with a complicated cultural identity? We get that. What’s problematic is when you slide into positions of authority and influence pretending to be an African American when you are not or put your #whitecomplicatedidentityissues on the same scale as my #blackamericanlivedexperience.

Is this a question of fantasy? Delusion? Is the mantle of being a “strong Black woman” critical to her soul view?  Right now a lot of African Americans are confused by this story. Does she want “everything but the burden”? Or is the burden what she craves? We are bemused and befuddled but this is for sure, if Rachel wanted in on the tribe, there were much easier ways to achieve  that.

But there are larger systemic issues at work. There are relatively few high profile cases of white people trying to pass for Black. One of the more heart wrenching was the case of James McBride, author of The Color of Water, whose olive toned, curly haired Ashkenazi Jewish mother escaped an abusive household, fell in love with a Black man and passed herself off as a light-skinned Black woman.

We don’t question the perceived good Rachel Dolezal has done for her part of the world through her work in the NAACP  (which by the way has always had white member) and as an academic.  We have a saying in African American vernacular speak–“cut to the white meat” or hitting a deep spot of no return in an argument or conflict. We haven’t hit it yet. She claimed to be on the receiving end of hate crimes…real, imagined, suspicious, phony?  If she received threats who were they impacting, her perceived self or her real self?

Part of it is our refusal to cut to the white meat of our deepest held cultural conceits. The script has been flipped in this case more than flapjacks at a pancake breakfast.  When enslaved Africans came to this country it was assumed that “seasoning” them and robbing them of their old ways was a blessing. It was not. In fact, the removal of many specific traditions weakened our family life, self-esteem, sense of communal responsibility and cultural ingenuity.  Ethnic traditions became a racialized hodge podge. We lost our ethnic verve – supposedly what drives everyone else to achieve and find their way into the American fabric—and we exchanged it for 400 years of battling for racial justice–to be seen as equal or good enough.

At the same time, what seemed like a great idea for Europeans in America, the loss of ethnic diversity as people began to take shape. You can be free free from your Italian, Irish, Jewish, or Slavic self. You can stop swinging from nooses on street poles, you can cease being told you “need not apply,” and those Old World blood libels are out the window. Over the course of a century, let’s say 1850-1950’s a new whiteness was born. Ethnic particularity died in favor of a user friendly whiteness that with some exceptions gave most European Americans reasonable social mobility.  It produced a whiteness that defined normality, superiority and a neutral base on which to build identities as creators and consummers. It also produced a bland industrial whiteness with no flavor. Whiteness became at best, a stew spiced with strong dashes of class and sexual identity flavored with borrowings from the non-white others. I gave up what made me special can I have some of yours?

Meanwhile back in Black America, the culture used scrips and scraps left over from Africa to spice a new stew, a vibrant one based on the constant need for uplift and to respond to oppression. We Black folk inherited a cause-based survival, from cradle to grave. The notion of the “struggle,” is so much a Black New World term you can even find it in Haitian Kweyol or Brazilian Portuguese.  Not only that, but an almost universal system of segregation helped encourage an interior world among people of color. Our culture became a response to a call…our language, our music, our religious life, all of it seemed to speak of our need to cling for dear life to our ancient roots, the challenge to prove our equality, the struggle against oppression and the creation of a world that white supremacy and hegemony could not dare penetrate.

If you look at it from that perspective, it’s not hard to go a little soft on Rachel.  White culture in America is a victim of its own urge to be Israel Zangwill’s “melting pot.” Black culture despite losing an enormous amount during our forced exile and humiliating assimilation process became meaningful and rich and interesting because it had goals and movements and aspirations. White culture’s urge towards appropriation rather than assimilation is not a surprise, it’s a symptom.

I wish Rachel Dolezal well in her search for her authentic self. Maybe she is the tan sister with the mixed-chick hair. Maybe she’s going to have a change of heart in how she expresses herself. Either way, her contributions for the good have been appreciated and if she wants in on our tribe, her application is already filled out.

17 comments on “Cutting to the White Meat: The Real Issue With Rachel Dolezal”