I am delighted to announce tlhat I will be appearing on the first episode of The African Americans: Many Rivers to Cross with Henry Louis Gates, Jr. on Tuesday, October 22, 2013.  Set your DVRs now 🙂   There will be repeats so catch those too!

Hoppin’ John from the Lowcountry and Black  Eyed Pea (Cala au Congri) and Rice Cakes (Cala) from the Chesapeake and Lower Mississippi Valley
http://www.pbs.org/wnet/african-americans-many-rivers-to-cross/video/#26
and to find your local listing for the program:  http://www.pbs.org/wnet/african-americans-many-rivers-to-cross/schedule/ 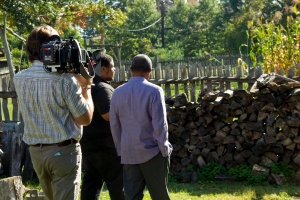 The first episode is called THE BLACK ATLANTIC 1500-1800 and deals with the earliest experiences of the African American people from our origins in West and Central Africa through the early colonial period into the 18th century.  One of the aspects of this shift in culture and identity is through food.  I was so pleased that one of the producers reached out to me and of course 6 hours is going to be about 5 minutes or less of airtime –but I don’t care this is a major blessing and I am so happy to share it with all of you who have watched me work to get here.  I thank all of you for subscribing to Afroculinaria and being the impetus for so many good things! Until then enjoy some behind the scenes and close up shots of the historic  foods I prepared for Dr. Gates.
P.S. I will be live tweeting during the show, follow me on Twitter @koshersoul  Enjoy the pictures!

11 comments on “Tune in Tonight: Many Rivers to Cross With Dr. Henry Louis Gates Jr.”