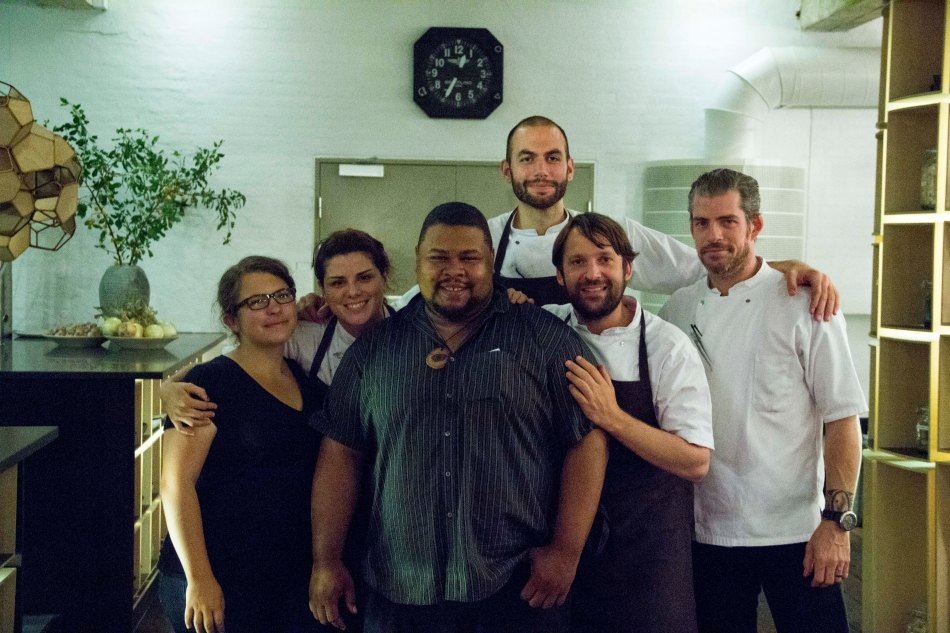 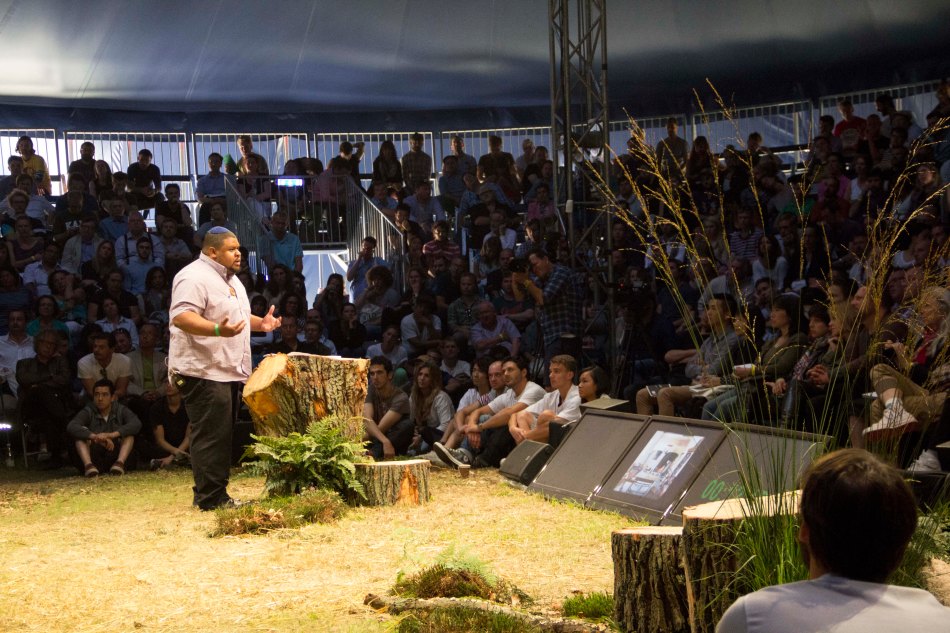 On August 1, 2013, I received an email from Rene Redzepi (that’s the back of his head in the picture above) chef-proprietor of the “world’s best restaurant,” (I concur…). I was asked to speak at the MAD Symposium on my journey towards culinary justice (That sounded incredibly nonchalant…I sat in a catatonic state for ten minutes then immediately started kicking myself for not renewing my passport sooner.)  And a shower and a shave later, I left for the post office and had it renewed that day. (When the little angel tells you to do something and you do…”that ain’t gonna happen…do what the little angel says please!!!!!!”) From that moment on I’ve been running ever since–here are the highlights of the journey so far.

There isn’t much I can say about MAD–nicknamed by many the “TED talks of Food,” or Chef Rene that far more “in crowd” folks have already said.  MAD is Danish for “food,” much like Redzepi’s restaurant NO(rdic) MA(d) means “Nordic/Scandinavian Food.”  When I accepted the invitation I recognized the name of my buddy and your favorite Fermentation Fetishist, Sandor Katz, but I met a whole cast of characters—people I had never heard of and people I have long admired…from writer and eco-feminist Vandana Shiva to Chef Alain Ducasse, from LA’s one and only Roy Choi to and Diana Kennedy.  Phenomenal artist David Choe (just so you know DC…you promised me Korean bbq if I am in LA so I’m just reminding a brother….) spoke and the most fearless chef you will ever meet, Ahmed Jama (his restaurant, The Village, in Mogadishu, has been destroyed by terrorists and he still keeps re-building!)  I met a jewel of a person in the form of Scottish ten year old Martha Payne–the youngest food justice activist I have ever met and author of the extremely popular blog, “Never Seconds.”  I will be sure to add the video of my talk to this post and on its own later when it is edited and posted.

Walking into the Leviathan sized, blood-red tent at MAD for the first time was like walking into a giant, living, beating heart.  Curated this year by David Chang of Momofuku and Chris Ying and Peeter Meehan of Lucky Peach (where I will have a piece debuting next issue), was one of the most intimidating things I have ever done since speaking at Oxford University in 2010.  “Why the f— am I here?”  “Can I do this?”  “These people are hungry–for inspiration, for truth, for a new way into food and a new way to reach people through food…they have professional training, I don’t, what do I possibly say?”  It’s really hard to express how powerful the energy was and how creeping up those steps to hear my first MAD presentations felt.  The atmosphere was like Raphael’s School of Athens without the stodge…the audience was mostly 20s-30s and I think I was in the non-tattooed minority.

Because of the Lucky Peach piece and because of the forthcoming video and talk post on the MAD site, I won’t recap what I talked about.  I know that I spent two hours before the short talk trembling in fear and semi-memorizing my speech before Rene ran out on the stage and introduced me.  I walked out–made a joke or two and then pleaded for culinary justice as if I was pleading for my life…the log–which was anointed with pig innard juices, the theme was GUTS after all, ironically made a fitting bema for my sermon.

MAD meals were an incredible slice of what the culinary world has to offer today.  I missed Sunday’s Lebanese lunch, but enjoyed an amazing Momofuku pop up on Sunday night by the canals of Copenhagen and lunch after my presentation was done by eclectic eatery Mission Chinese .  Their use of pastrami and brisket to further Americanize Chinese food–is something I downright admire since I love using crossover ingredients in different culinary contexts. The result of their way of doing food was less fusion than it was gentle collision.  Their shmaltz fried rice ran out and their fermented and pickled condiments—well I was lucky to snag some, but got a good portion of the other delicacies they put on the buffet line.  The concluding dinner was outright the best meal, but it was so dark that I have no pics to share! I can tell you rhubarb sorbet is one of my favorite things to eat now. 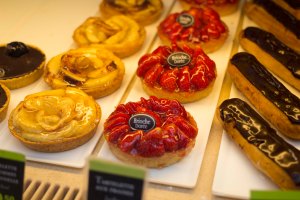 Scandinavian food in its native setting really spoke to me before I even walked into NOMA.  Mind you Denmark is the “deep south,” of Scandinavia, we’re not talking Magnus Nilson’s Faviken type Scandinavia….but it is definitely an incredible introduction to the region.  How do they do it?  How do they extract such delicious stuff out of an area that has some of Europe’s shortest growing seasons?  It’s not a question you can answer at the food court at Ikea. 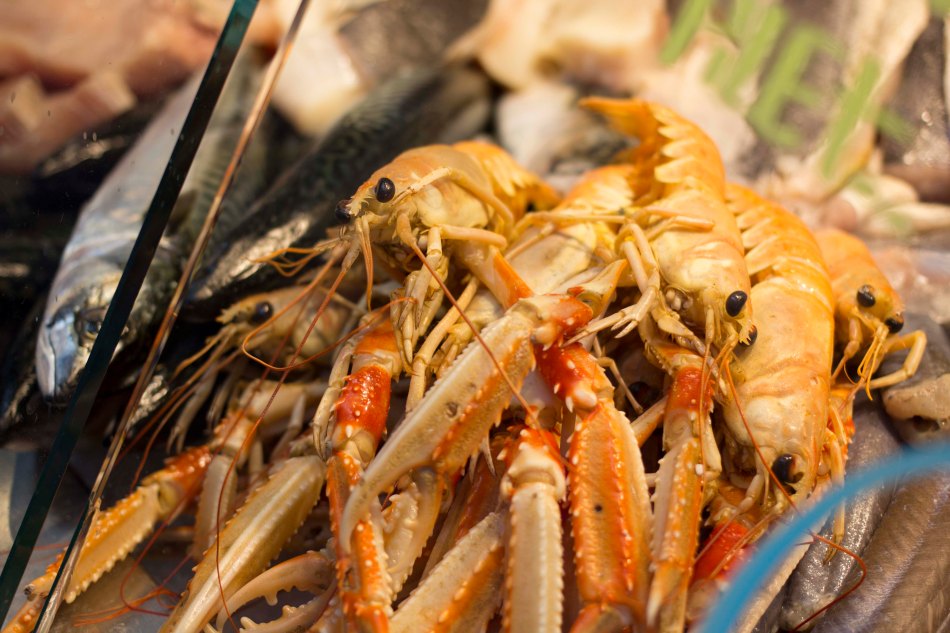 Scandinavia is not new to my family.  In the 1950’s my Grandfather lived their for a very short time, the guest of a Danish family during his stay.  They fed him fried chicken every night for three nights until he asked why they kept feeding him fried chicken.  At this point, they showed him a picture of a Black American family from the South eating fried chicken with fixings and he promptly told them–thanks but no thanks–he had had enough and he was ready for Danish food.  (He confessed to me it was not even a good imitation of Southern fried chicken, and that herring—a fish he was not used to–tasted pretty damn good after three days of bad fried chicken.) 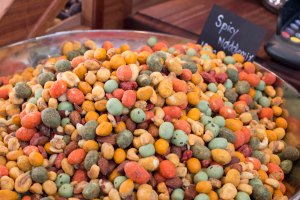 The Danes are fond of open faced sandwiches, known as Smørrebrød.  A trip to the food market in Copenhagen took me past an entire stand with dozens of varieties of fish or meat, sauces or condiments and a pickle or ferment topping pieces of rye bread. 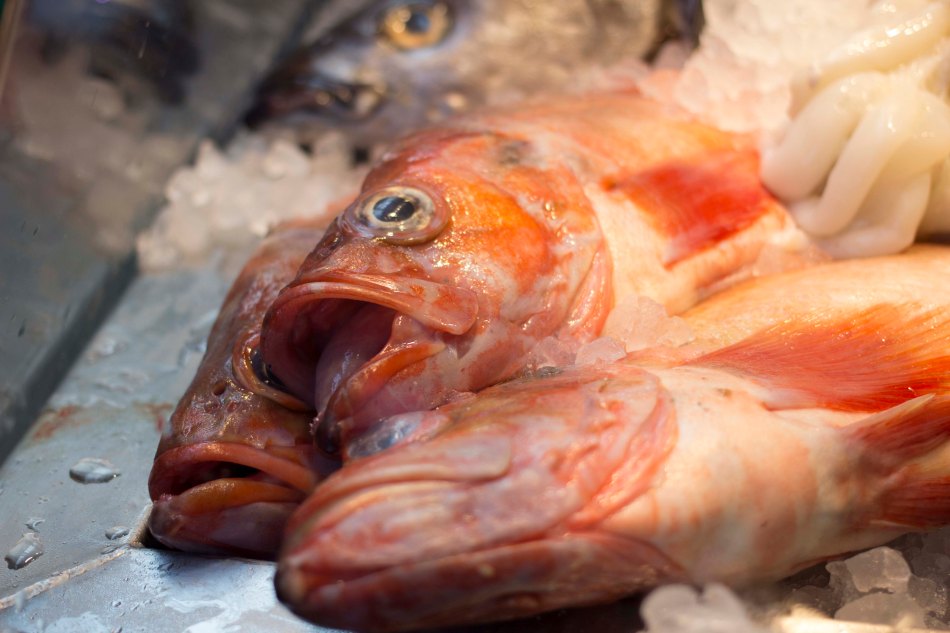 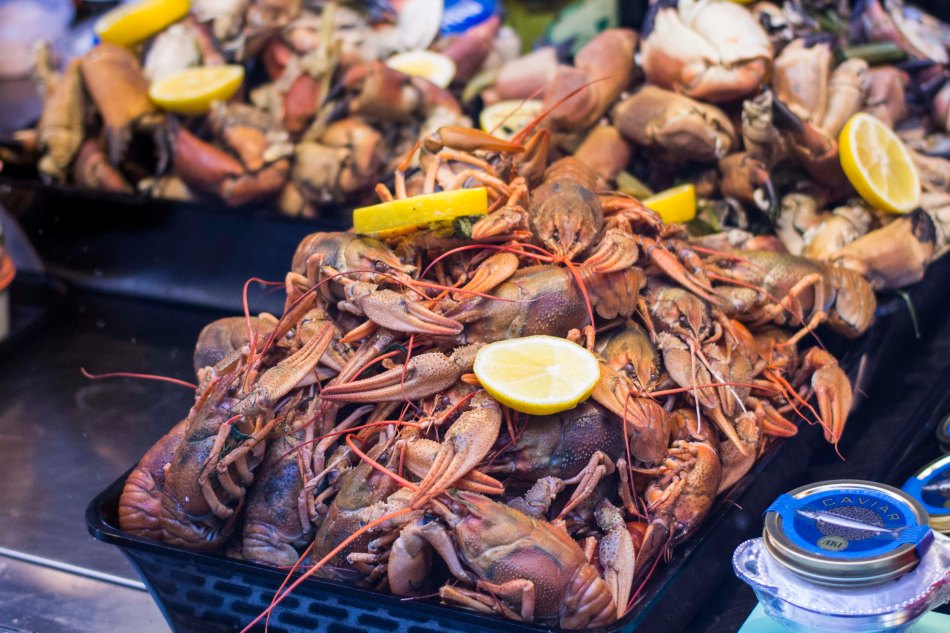 The land gives the Danes pork–bacon, sausage, ham, and cured meats I had never seen before—but they make their pigs into gorgeous crackling roasts which they serve with red cabbage and roast potatoes and the most spectacular thing which I have to steal–caramelized potatoes. 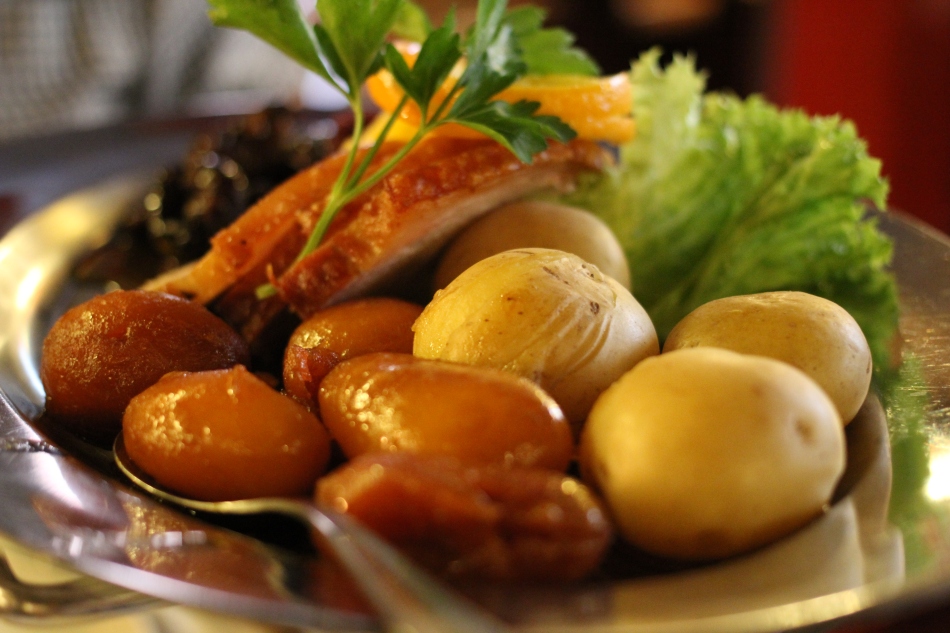 Caramelized potatoes and goose with apples is now something I am looking forward to making in December.  They are white potatoes that are cooked with butter and sugar in such an artful way you would swear you are eating the best sweet potato Louisiana has to offer.  Denmark is butter, cheese, cabbage, rhubarb, potatoes, onions, and riot of berries–mulberries, gooseberries, blackberries, black currants, elderberries and there are all sorts of other varieties from across Scandinavia that are relished here as well like wild blueberries and lingonberries.  The mushrooms and other edible fungi there are clean and herby, and the air has a constant brine in it that seasons every breath you take and the earth makes its presence known in every bite of its production.  Who knew the food of such a cool climate could be so inviting, warm, seductive and could convey a sense of the pristine. 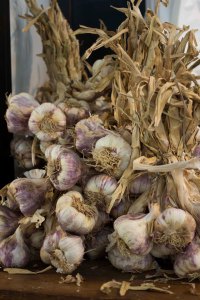 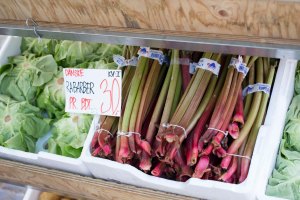 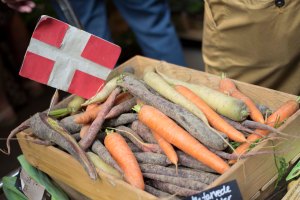 You can’t beat Rene Redzepi bouncing out of his world-famous restaurant to greet you saying only “I hope you’re hungry!”  His staff is bar none–one of the best I have ever encountered, many of them interns who spend three months in the extremely busy and tough kitchens sopping up what Rene has to offer while in turn having the chance to create and critique dishes created among themselves.  Again….this was my first real deal experience with modernist cuisine–and the most impressively local meal I have ever had.  What made this meal different was the NoMa vision is so aesthetically singular–no trends, no copies, no repeats–the seasons, availability, using the bits and odds and ends of what is edible, possible, beautiful around them is their secret.  Three courses in I was in a state of shock that a smooth rock could be the most beautiful plate I had ever eaten from or that a bed of living lichen could cradle deep fried reindeer moss.  Nothing escapes his eye as a chef…especially not Scandinavia’s evergreens—the moss goes with a juniper creme fraiche, there is a pine/apple juice combination that sets off the wild herbs on your plate; bits of young pine give a reverse pepperiness to its less loud companions. 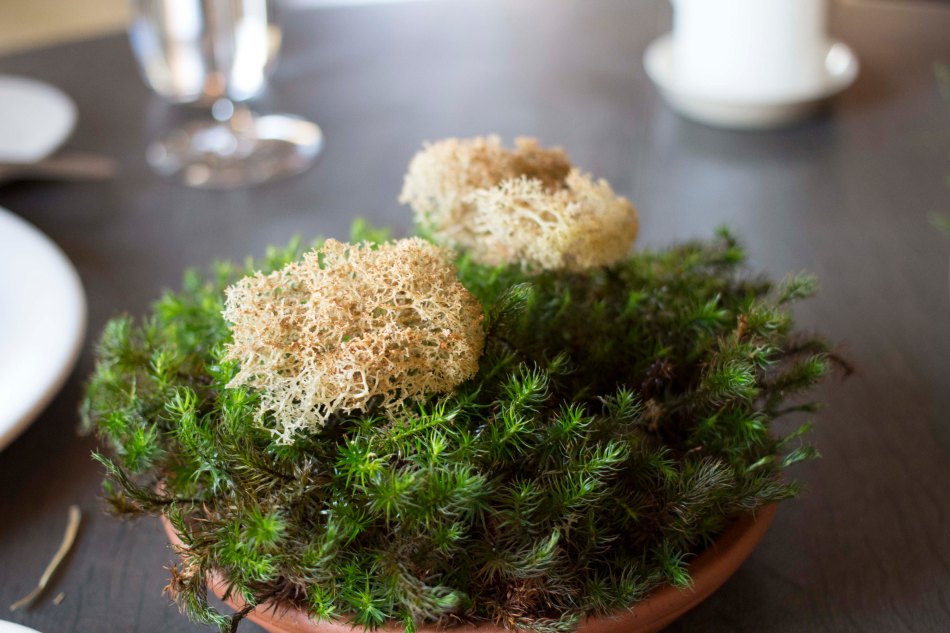 This meal was not a –scrape the bottom of your plate– good meal…rather it was a complete feast of the senses and it challenged me on every level.  I have to admit half my brain was thinking of ways to duplicate the spirit of the meal in my own context with historic and heirloom Southern foods.  Nothing more than 60 miles away—fruit picked in wild and brought to work on bikes, herbs and roots and wild flowers grown on a farm that produces hundreds of indigenous and traditional crops…to be able to work with a palette that rich and yet that intimately part of the land and sea scape…that’s what I envied most about NoMa.  My historical head saw the Vikings eating these same resources in totally different ways, but the fact that you cold trace a bloodline for so many of the ingredients back to Scandinavia’s dawn…was heartbreakingly moving and simultaneously affirmed the value of translating tradition in such a way that anybody can approach it, get it, digest it and feel it.

My heartfelt thanks to Rene, Mark, Ali, and the amazing staff of both MAD and NoMa for being so incredibly generous, kind, patient and giving.  I felt at home in Copenhagen and I want to say TAHG to them all from the bottom of my bowl 🙂 This was a hell of a treat for someone like me–an incredible learning experience that I hope to build on.

4 comments on “The Difference a Month Makes”